Herringbone is dragged into the daily standard of Southeast Asians

Flip-flops are not exclusive to Southeast Asians. In other Asian countries, such as China and Japan, many people love to wear them. Even in Europe and America, where the dressing is more orthodox, flip-flops are gradually accepted. But like Southeast Asians, dragging the characters into the “standard” of daily life, or even “wearing in” traditional costumes, in addition to Southeast Asia, I am afraid I can no longer find a second place. 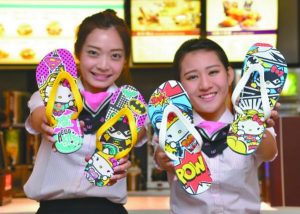 People in Southeast Asian countries love to wear flip-flops, but if they have to choose a “favorite”, the Burmese should be able to win easily. Myanmar is a country that wears flip-flops regardless of gender, regardless of the occasion. In this regard, Thailand, Laos, Cambodia and other countries that are used to wearing leather shoes on formal occasions still have a gap with Myanmar.

Frequently watching Myanmar news, we should find that the politicians on TV are sitting in danger, sitting seriously to discuss national events, and looking down at their feet, everyone is wearing “flip-flops.” This is not the casualness of the officials, but because in Myanmar, the flip-flops are not only necessities of life, but also quite formal, which was originally a great place to be. It is worth mentioning that on formal occasions, Burmese people will wear a pair of socks in the flip-flops to show their importance.

Aung San Suu Kyi, known as the “Myanmar Soul” and “Democracy Symbol”, once participated in the commemoration of the assassination of her father, the independent hero of Myanmar, General Aung San. On the same day, Aung San Suu Kyi wore a plain white shirt, a black Burmese yarn dragon, wearing a black scarf, wearing a pinch flip flop, and paying respectfully at the father’s tomb. The members of the National League for Democracy and government officials accompanying her to accompany her on the same day, like Aung San Suu Kyi, wearing flip-flops.

When China’s state-owned enterprise China Communications Construction Corporation first came to Myanmar to invest and build a factory, the Chinese personnel were very puzzled. Why did the Myanmar workers come to the construction site to wear flip-flops instead of uniforms? Habits are not made in a day. After the Chinese staff explained patiently over and over again, the Burmese staff gradually accepted the labor insurance shoes more suitable for the construction site.

Some scholars believe that Burmese people’s “cool love” for flip-flops is related to their religious beliefs. Burmese people believe in Buddhism, and when they have time, they will go to the Buddhist temple to worship Buddha and meditation. In the hearts of the Burmese, the monks and Buddha statues are holy and untouchable, and the shoes are dirty, so they cannot stain the ground of the Buddhist temple. This is respect for the Buddha. Therefore, Burmese must take off their shoes and take off their socks when they enter the Buddhist temple. In this case, it is very convenient to wear flip-flops.

Although not like the Burmese, wearing flip-flops on formal occasions, in fact, the Indonesian people’s love for flip-flops is unequivocal. Indonesia is located in the equator and is also the “land of Wanda”. Compared with other Southeast Asian countries, Indonesia has a hotter and humid climate. They like to wear flip-flops more because of the climate. An Indonesian friend told reporters that many Indonesian rural people wear leather shoes and sports shoes like Chinese, and they will rot when they are long. They are more accustomed to wearing flip-flops or directly barefoot. In Indonesian cities, even the largest city in Southeast Asia, such as the capital Jakarta, is still walking barefoot.

Indonesia’s traffic control is not strict and it is allowed to wear flip-flops to drive. Therefore, many Indonesians go to work or attend formal occasions. They usually wear flip-flops and drive to the destination to change their shoes. Some people simply keep a double drag in the car.

Gradually, the flip-flops have become Indonesia’s cultural business cards and even become part of traditional costumes. In the past, wearing flip-flops for Indonesians may be due to poverty or casual personality. Most of them wear a pair of inferior flip-flops of around RMB 10 yuan.

Now, when the flip-flops become part of Indonesian culture, Indonesians are paying more and more attention to the style and quality of the flip-flops, and even packaging the flip-flops into trendy brands. In Jakarta’s major shopping malls, a wide variety of colorful flip-flops can be seen everywhere. The price range is also very wide. From the cheapest few yuan to the most expensive one thousand yuan, it can be said that it is very rich, no matter what class, you can choose a pair of flip-flops suitable for you.

Although Singapore is also an uncompromising Southeast Asian country, with the aura of “the only developed country in Southeast Asia”, Singapore, which has always been “higher”, seems to be difficult to link with the “Limba people”. But in fact, Singaporeans are also loyal fans of flip-flops, not even losing to other countries, because they will wear flip-flops “rise” for a life attitude.

It is worth mentioning that Singapore, which has a large number of Chinese, is greatly affected by Hong Kong and Taiwan, and it is more often called flip-flops. Walking on the streets of Singapore, if you see a handsome guy in a trench coat and sunglasses, but he is wearing a flip-flop, please don’t be surprised, that is the normal dress of the Singapore fashion guy. Singaporean girls also love colorful flip-flops. The beautiful girls will also scrub their feet before going out, fix their toenails, and ensure that their feet are in the best condition to show their most beautiful people. Word drag.

Singapore is known for its strict laws and regulations. It is forbidden to wear flip-flops in university libraries. However, many young men and women in Singapore will still pull in the flip-flops. Over time, the administrator closed his eyes with one eye.

In the 2006 Singapore election, a small opposition party made a big eye. The party’s candidates were all dressed in slippers, so they were also called “slipper party” by the media. The “Slipper Party” claimed that the slippers symbolize unpackaged and unpretentious. They are running in slippers, hoping to express their dissatisfaction with the ruling party’s packaging behavior in internal affairs and diplomacy.

Although the “slipper party” failed to make waves in the political arena, its appearance seems to explain from another angle that slippers are not only convenient and beautiful costumes in Singapore but also the attitude of some people.